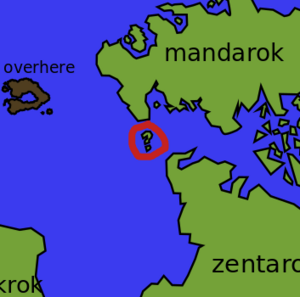 Where Wonderer Land is (circled in red)

The Wonderer Land is a place where everyone is confused. It is mainly used by the Mifernian Republic as a place where people who do bad crimes are exiled to. The residents of this land, the Thinkers, wonder and wander all day.

The land exists in both the Mineral Fish universe and on the planet of Pyrocrick, reportedly due to a glitch in world generation.[1]

The Thinkers, the residents of the Wonderer Land, are notable for their very limited creativity. In the thousands of years they have existed, they have not developed any form of language or a concept of time.

Interjections are the only thing that The Thinkers' limited creativity does not limit. And the one thing they're good at, they are professionals at. They create an interjection an hour. However, they won't know they're creating interjection this often as they do not have a concept of time.

On average, The Thinkers create an interjection every hour, which implies 24 new words are created in a day. However, they won't know they're creating interjection this often as they do not have a concept of time.

This interjection became a disease that spread throughout dimensions, even though there was no communication between The Thinkers and the outside world, let alone dimensions. This disease does not do any harm, except for using "Eh" as a common interjection. Canadians are most vulnerable to this disease.

The Thinkers create random profanity every two days or so. It is banned in certain regions, but that does not stop them from creating new ones to circumvent this ban.

Nani comes from the Japanese word 何 (Hiragana: なに, pronounced as na-ni), which means "what". This interjection is commonly heard from people who think they know Japanese but only watch anime.

Retrieved from "https://mineralfish.miraheze.org/w/index.php?title=Wonderer_Land&oldid=4882"
Cookies help us deliver our services. By using our services, you agree to our use of cookies.