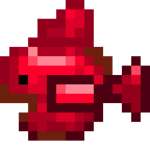 This article is about a fanmade fish.
A fanmade fish is a fish that was not made by -gge.
It was made by the fans of the Mineral Fish.

Mario Fish is a fan made Mineral Fish. It was made by Scratch user 64lu.

Mario Fish was originally just a clone of Mario, but after a mishap at the Mario Holding Center, Mario Fish fell into a vat of Mifernite, which turned him into the fish he is today.

Nobody knows Mario Fish's true purpose, as there are no known documents about him. We tried to reach out to Mario Fish for comment, but have not gotten a response at the time of this being written.

Mario Fish is made of a clone of Mario Mario.

Mario Fish's voice is nearly identical to Mario Mario's, with the exception being that it's noticeably more watery than normal.

A Mario Fish has appeared before, but if it's the same as this one or even related remains to be seen.

Retrieved from "https://mineralfish.miraheze.org/w/index.php?title=Mario_Fish&oldid=5013"
Category:
Cookies help us deliver our services. By using our services, you agree to our use of cookies.