Copper Fish Has Time Machine is a story of Copper Fish and an unnamed person using a time machine and going through time. Each part of the story was released on the Mineral Fish Scratch Forum thread in a screenshot of the story being written in a text editor running under various older versions of Microsoft Windows. 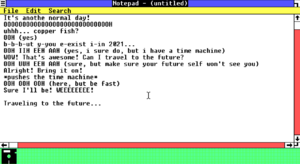 The original Part 1 image
Part 1 was written by JackyBorderCollie in Windows 1.01.

Its another normal day!

OOH IIH EEH AAH (yes, i sure do, but i have a time machine)

WOW! That's awesome! Can I travel to the future?

00H WOH EEH AAH (sure, but make sure your future self won't see you)

Alright! Bring it on!

Sure I'll be! WEEEEEEEE!

Traveling to the future... 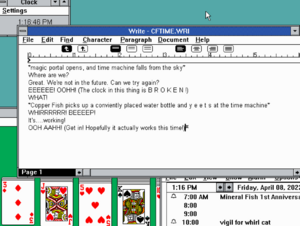 The original Part 2 image
Part 2 was written by TheGlassPenguin in Windows 3.1.

*magic portal opens, and time machine falls from the sky*

Where are we? Great. We're not in the future.

Can we try again?

OOH AAHH! (Get in! Hopefully it actually works this time!) 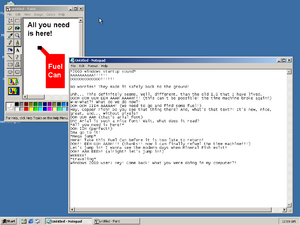 The original Part 3 image
Part 3 was written by JackyBorderCollie in Windows 2000.

No worries! They made it safely back to the ground!

uhh... This definitely seems, well, different, than the old 1.0 that I have lived.

OOH OOH IIIH AAAAAH! (we need to go and find some fuel!)

Hey, Copper Fish! Do you see that thing there? And, what's that text?! It's new, nice, great, and... without pixels!

oh! Arial is such a nice font! wait, what does it read?

Here! Take this Fuel Can before it is too late to return!

Let's jump in! I wanna see the modern days when Mineral Fish exist!

windows 2000 user: Hey! Come back! what you were doing in my computer?! 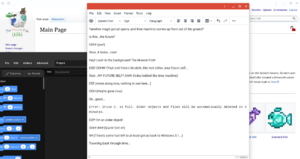 Part 4 was written by TheGlassPenguin in Windows 10.

*another magic portal opens, and time machine comes up from out of the ground*

Hey! Look! In the background! The Mineral Fish!

EEE! OOHH! (Yep! and there's Scratch, this text editor, your future self...)

Wait..MY FUTURE SELF? AAH! *hides behind the time machine*

EEE (move along now, nothing to see here...)

Error: Drive C: is full. Older objects and files will be automatically deleted in 5 minutes.

Traveling back through time... 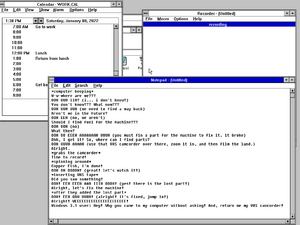 The original Part 5 image
Part 5 was written by JackyBorderCollie in Windows 3.1

OOH UUH UUH (we need to find a way back)

Aren't we in the future?

Should I find fuel for the machine???

OOH OO EEEH AAAAAAAH UUUH (You must find a part of the machine to fix it. It broke)

OOH UUUH AAAAH (use that VHS camcorder over there, zoom it in, and then film the land.)

Did you saw something?

*after they added the lost part*

Windows 3.1 user: Hey! Why you came to my computer without asking! And, return me my VHS camcorder! 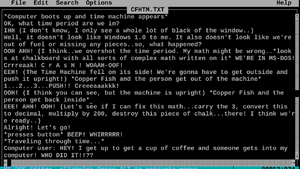 The original Part 6 image
Part 6 was written by TheGlassPenguin in MS-DOS EDIT.

OK, what time period are we in?

IHH (I don't know, I only see a whole lot of black out the window..)

OOH AHH! (I think..we overshot the time period. My math might be wrong..*looks at chalkboard with all sorts of complex math written on it* WE'RE IN MS-DOS!)

EEH! (The Time Machine fell on its side! We're gonna have to get outside and push it upright!) *Copper Fish and the person get out of the machine*

OOH ! (I think you can see, but the machine is upright) *Copper Fish and the person get back inside*

Computer user: HEY! I get up to get a cup of coffee and someone gets into my computer! WHO DID IT!!?? 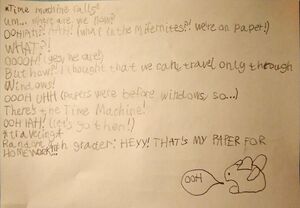 The Copper Fish image from Part 7

Part 7 was written by JackyBorderCollie on a normal paper.

But how?! I thought that we can travel only through Windows!

OOOH UHH (papers were before windows, so...) 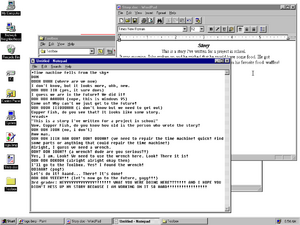 Part 8 was written by JackyBorderCollie in Windows 95

*Time machine fells from the sky*

OOOH UHHH (where are we now)

OOH UUH IIH (yes, it sure does)

I guess we are in the future! We did it!

Come on! Why can't we just get to the future!

Copper Fish, do you see that? It looks like some story.

"This is a story I've written for a project in school"

Wow. Copper Fish, do you know how old is the person who wrote the story?

Alright, I guess we need a wrench.

Yes, I am. Look! We need to use the wrench here. Look! There it is!

I'll go to the Toolbox. Yes! I found the wrench!

Retrieved from "https://mineralfish.miraheze.org/w/index.php?title=Copper_Fish_Has_Time_Machine&oldid=4689"
Category:
Cookies help us deliver our services. By using our services, you agree to our use of cookies.